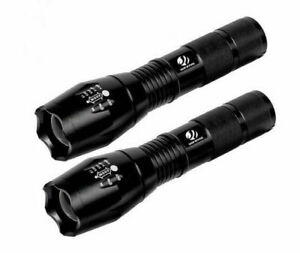 ★★★★☆ Mentally ill brightness turns every dark corner into bright sunlight the only drawback might be you need a 14500 battery (14mm diameter x 50mm height) NOT an 18650 (18mm diameter x 65mm height) (the listing is wrong) and the 14500 battery is 3mm thinner than the flashlight, causing some to assume an AA battery will do---it wont, as the led will conk out faster with AA than with the correct 14500 battery and the lens rocks around a little maybe due to manufacturing tolerance or lack of an o ring seal between lens and front cover highly recommended, i bought 4 and gave 3 of them as fantastic gifts

★★☆☆☆ I deliberately paid more for this eBay item because it clearly says in the title that it is a 2 Pack. The package comes with some other stuff, not really helpful, but there is only one taclight in the shipment. The flashlight itself is no better or worse than the dozens of other taclights being advertised, and I have some to compare it to. I do not know if this taclight's lumens are long-lasting, or if the flashlight casing and LED are durable. If you are looking for a single taclight, then there are better values available. But you won't get a 2 Pack of taclights from this item.